The Sims go back in time and get medieval! The Sims Medieval takes The Sims into the Middle Ages with all new features, new graphics and new ways to play. For the first time, players can create heroes, venture on quests, and build up a kingdom. In an ancient land of adventure, drama and romance,

The Sims go back in time and get medieval! The Sims Medieval takes The Sims into the Middle Ages with all new features, new graphics and new ways to play. For the first time, players can create heroes, venture on quests, and build up a kingdom. In an ancient land of adventure, drama and romance, players will be able to get medieval like never before.

The Sims Medieval is a brand-new direction for the popular single player Simulation game franchise, as the familiar gameplay mechanics of The Sims are blended with light Role-Playing (RPG) elements in a Medieval European setting. In this new incarnation PC and Mac players must both assure the happiness of their Sims on a day-to-day level, as well as support the aims of the kingdom they build and engage in all manner of quests which Sims can take on singularly and in groups up to three. New features include: a wide range of available Sims hero types associated with buildings constructed, each with a fatal flaw to overcome; a leveling system for characters based in replayable quests; and an overall player-chosen goal for kingdoms.

The Sims Go Back in Time and Get Medieval

The Sims Medieval takes The Sims franchise into the Middle Ages with all new features, new graphics and new ways to play. For the first time, players can create heroes, venture on quests, and build up a kingdom all their own. In an ancient land of adventure, drama and romance, players will be able to get medieval like nobody could ever have imagined.

The Sims go Medieval on you combining classic play mechanics with RPG functionality in a Medieval setting.
View larger.

As with all The Sims games, The Sims Medieval is primarily a Simulation game where the player is responsible for all aspects of their sims’ lives. But The Sims Medieval expands on the classic The Sims gameplay formula by affecting the focus of players and their Sims via a change of environment and game mechanics. The game adopts a “what if” scenario, placing your sims in a Medieval setting, complete with castles, monarchs, knights, peasants, intrigue between kingdoms, etc. Thus the question is: What if a The Sims game was set in a Medieval European time period? The answer to this is that although the player must still be very concerned about the day to day happiness, or unhappiness, of their Sims, there are also other concerns appropriate to the time period, or at least the game’s interpretation of the time period. This equates to the three-tiered approach to gameplay centered around: kingdom, heroes and quests.

Life in the kingdoms of The Sims Medieval revolve around castles and the other buildings and facilities that are added to a kingdom. As a kingdom is established players codify the overall ambition of their kingdom. These ambitions can reflect a variety of concerns, including political, military, economic, etc. and will serve as a sort of mission statement for everything that transpires among the Sims that populate a kingdom. In the end this initial decision affects both Sim happiness and the overall fate of your kingdom. With each building that is added during the game players gain access to specific hero character types associated with them. These range from lofty roles like rulers, knights and wizards, all the way to the more humble physicians, craftsmen, etc. These different types of Sims can be customized in ways familiar to players of earlier games, including apparel and temperament, as well as the new fatal flaw customization, which must be worked out if players choose to work towards their sims prospering. The cumulative experience of this customization makes up the building blocks of a Sim’s day-to-day experience, actions in the kingdom and happiness. Once the player’s Sims are established, the game opens up into an additional crucial gameplay area, quests.

Quests in The Sims Medieval contains a certain level of role-playing game mechanics, which is new to The Sims franchise, and which offers players the opportunity to earn skill points, experience points and kingdom points. Following standard RPG game mechanics, points allow for leveling up of Sims characters and kingdoms. Thus, quests are also a crucial element of the game that drives the story of the game forward, depending on their success or failure, the temperaments of the participating Sims and the goals of the kingdom. Simple quests can be taken on by a single Sim while more complex endeavors can require up to three Sim heroes. All quests contain multiple paths towards completion, which are further varied by the fact of the differing strengths and weakness of your chosen heroes. This type of flexibility in quests allows for maximum replay value of the game, as the outcome of quests can vary widely depending on the Sim heroes utilized.

Classic The Sims gameplay set in an exciting Medieval European setting full of adventure, drama, and romance Gameplay requires a balance between the day-to-day wants and needs of Sims heroes, as well as the quests required of the them and the declared goal of the kingdom Light RPG gameplay as players create heroes, send them on epic quests and level up their skills and abilities Quests allow for extensive replay value as players use a combination of up to three Sims heroes, then replay quests using different heroes Fantastic customization options including extensive Medieval attire choices and building creation and decoration options Win/Mac software release allows for play on PC and Macintosh computer systems 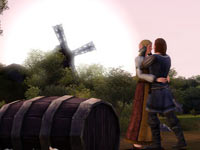 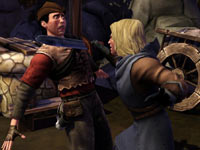 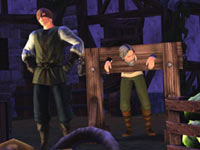 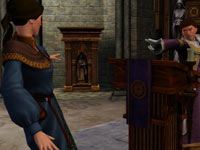