Tera is the first true action MMORPG. What does that mean? Tera provides all the depth of any MMO–quests, crafting, an intricate plot, PvP, and more-combined for the first time with the satisfaction and skill of a console action game. No more are you confined to tabbing and then standing around and eating a sandwich

Tera is the first true action MMORPG. What does that mean? Tera provides all the depth of any MMO–quests, crafting, an intricate plot, PvP, and more-combined for the first time with the satisfaction and skill of a console action game. No more are you confined to tabbing and then standing around and eating a sandwich while taking on a boss. You’re at the center of the action, hitting where you aim and reacting in real-time to dodge and move out of the way when attacked. In Tera, skill and substance combine for an entirely new MMORPG experience.

Tera is a subscription-based* fantasy MMO (Massively Multiplayer Online) game for play on the PC that blends traditional MMO RPG elements with Action combat like no game before it. In the persistent game world of Tera, players can work alone or form groups and join guilds, but regardless of the approach, players must fully control their characters using the game’s dynamic battle system in order to succeed. Additional features include: a customizable user interface, seven races with access to eight character classes, engaging PvP combat, and a three-continent wide game play area to explore.

Tera is the first MMORPG featuring true action combat, providing all of the depth of an MMO with the intensity and gratification of an Action game. Players fully control their characters using the game’s dynamic battle system. Player actions can change the balance of power in a world threatened by dark powers as seven allied races try to work together to protect their lands from marauding monsters, underworld dwellers, and evil scheming gods.

A redefinition of the MMO that requires skills in combat instead of simply leveling characters and adding adding armor.
View larger

Set in a breathtaking world conjured by two dreaming primal gods, your explorations will take you over rugged mountains, across searing deserts, and through hazardous jungles. Take your place as a soldier for the Valkyon Federation and fight alongside other races to forge a new future while healing the mistakes of the past. There’s no time for factions in Tera – all seven races and eight classes must cooperate to wrench destiny from the gods themselves. Arm yourself, gather your allies, and take control of your fate. Fighting prowess, guild rankings, and social dynamics come together as you find yourself vying for political control of the world itself in Tera’s unique endgame.

A New Breed of MMO – Tera takes the fight beyond whack-a-mole monotony with enhanced aiming, dodging, and tactical timing to create intense and rewarding combat. Unlike other MMOs, you can use your controller or keyboard and mouse to control the action like never before. With all the depth you expect from a traditional MMO, plus the intense gratification of action combat, Tera changes all the rules. True Action Combat – Experience an Action MMO beyond “point and click” where skill, position, timing, and aim determine success in combat. A Vast Fantasy World – Play seven character races and eight classes. Battle hundreds of monsters throughout 80+ zones and embark on thousands of quests in a game world rich in history and lore. Epic Monster Battles – Advanced enemy AI and enormous bosses deliver a more intense and engaging combat experience. Stunning Graphics – Explore a world filled with breathtaking visuals powered by Unreal Engine 3. A Vibrant Online Community – In a faction-free world, all players can impact the community as well as the social, political, and economic structures of Tera. Choice of Control – Play with mouse and keyboard or your favorite PC-compatible console controller. Multiplayer Guilds and Groups – Quest through the persistent world of Tera with friends using the game’s Group and Guild systems to defeat huge enemies, complete difficult tasks and collect enhance questing benefits of questing. 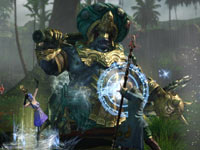 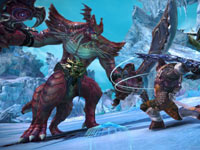 Use your choice of controller.
View larger 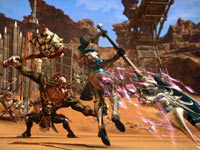 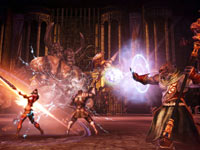