Star Wars Empire at War is the first game ever that gives you the power to command an entire war for the Star Wars Galaxy at your finger tips and the freedom to decide how to do it. The game is set between Episode III and Episode IV of the Star Wars series. This real-time

Star Wars Empire at War is the first game ever that gives you the power to command an entire war for the Star Wars Galaxy at your finger tips and the freedom to decide how to do it. The game is set between Episode III and Episode IV of the Star Wars series. This real-time strategy takes place in the wake of the Jedi slaughter that has disrupted the balance of the force. Players wage ground and space battles all in an effort to gain control of the galaxy. All of the gameplay and action within Empire at War is persistent, meaning that strategic and tactical elements from previous events will have a permanent effect on the galaxy.Star Wars: Empire at War (Collector’s Edition) is a Real-Time Strategy (RTS) game that is, quite simply, amazing in its scope and grandeur. This game has all the elements that both hard-core Star Wars fans and dedicated strategist gamers are looking for. In Empire at War, you must fight battles in space and on the ground, giving the game a dual-layered design that forces you to operate on both an involved strategic level as well as a tactical level. Add epic-looking battles with dozens of great touches, outstanding sound effects that you’ve come you’ve come to expect from LucasArts, the contrasting play styles enabled by playing either the rebellion or the empire, and a broad array of unforgettable characters, and you’ve got a game that lets you truly immerse yourself in the Star Wars universe. 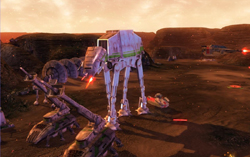 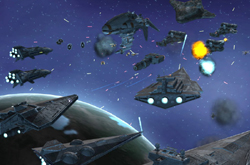 Star Wars: Empire at War has a huge number of variables you’ll need to consider. Many planets have unique bonuses, such as allowing certain units to be created more powerfully or cheaply, thereby increasing your credit income by different degrees, as well as only allowing the largest ships like Mon Calamari cruisers and Imperial Star Destroyers to be built on certain planets. And the Empire and Rebels obviously both have their differences. The Empire usually generates a lot more money, which it can use to eventually overwhelm the rebel forces if left unchecked, but it has to find them first by sending out probe droids to seek out their forces. The Rebels, on the other hand, have far fewer resources, which can make them more difficult to play and learn, but they can steal technology and sneak raiding parties past many of the Empire’s space defenses. And each of the two sides has their own distinct Hero units, which can be extremely powerful and can sway the course of battle greatly. You can use Palpatine or Mon Mothma to reduce a planet’s production costs; C3PO and R2D2 to steal technology or hack into an enemy’s turrets and turn them against their own troops; Darth Vader to force-push entire groups of enemy soldiers on land; or Boba Fett to crush concentrations of fighters by dropping seismic charges in space. To balance out these massive powers, both sides can hire generic bounty hunters to try and eliminate a rival hero from the game.

While the land battles in Star Wars: Empire at War are highly enjoyable and extremely challenging, involving heavily armored AT-ATs and more, the space battles are truly breathtaking. Seeing a Star Destroyer crawling with bright-blue ion energy, watching an entire wave of X-wings explode into flame, or witnessing a fully-armed and operational Death Star blow a planet to smithereens are unparalleled experiences in this galaxy or any other. And the visual and sound effects aren’t the only thing that will amaze you during a space battle. The bigger units like space stations and Star Destroyers all have hard points pertaining to different systems. You can target these different systems to cripple ships in different ways, taking out their shield generator, weapons system, or engines to reduce their effectiveness, or taking out the hanger on Imperial capital ships to thin out their fighter cover. And as you destroy a cannon or shield generator, that piece will break off and float away, and while most ships eventually explode, the Mon Calamari Cruisers and Imperial Star Destroyers will actually tear in to pieces that continue to linger throughout the battle. What’s more, you always need to watch out for ships the AI (artificial intelligence) might be hiding in asteroid belts, waiting to spring them on the flanks of your fleet at the worst possible moment.

The strategic layer of Empire at War takes place on a two-dimensional galactic map showing you all the planets. In the full campaign mode, you must consider and plan around more than 40 such planets, whereas in some of the simpler conquest scenarios, you may end up dealing with as few as eight or 10 of them. Instead of playing in the campaign mode, you can play multiplayer matches over a LAN or online with up to eight players. The LucasArts’ matchmaking system makes finding an opponent easy, and if you are playing a head-to-head match against a friend, you have the ability to save a match and reload it to continue at a later time. Delivering a presentation that is as epic as the films themselves, Star Wars: Empire at War is ideal for any fan of strategy games, and absolutely necessary for Star Wars aficionados.

This Collector’s Edition is also packed with bonuses, including five new playable Skirmish maps that span the galaxy from the shipyards of Kuat, to land and space battles on Ryloth and Polus. You also get exclusive concept art that illustrates the evolution of the game’s look, and two screensavers that celebrate the Star Wars universe with X-wings, TIE fighters, and a demonstration of the Empire’s ultimate weapon — the Death Star. Plus the Collector’s Edition ships with four wallpaper images and a 3D lenticular package.