Lord of the Rings: War in the North

The Lord of the Rings: War in the North is a co-op Action RPG that immerses you and your friends in a brutal new chapter in the War of the Ring. Drawing inspiration from both the literary and film rights to world of The Lord of the Rings players will bloody their axes on a wide range of deadly enemies and traverse both established and never-before-seen locations. The result is a journey that is both epic and intimate familiar yet unexpected.Key Features:Action Meets RPGIntense visceral and satisfying bat. Rich layered and impactful character progression. In War in the North you get both. Fight through the brutal realities of the War of the Ring as you customize a new character in the universe Tolkien created. Immerse yourself and make your own mark on Middle-earth.Co-op at its CoreMiddle-earth is too brutal for any one man to survive. Draw upon the strengths of each characters unique racial abilities and build your own fellowship of three heroes to confront the growing army in the North. You must fight together or you will die alone.An Untold StoryWhile much attention and focus has been placed on the journey of the One Ring the assault on Middle-earth hits all corners of the map. War in the North turns our attention toward an integral part of the storyline that is grounded in details from the books and various appendices.System Requirements:Operating System Required: Windows XP Windows Vista or Windows 7 CPU Required: Intel Core2 Duo 2.4 GHz or AMD 64 X2 4400 Remended: Intel Core2 Duo 3 GHz or AMD X2 5000 or AMD Phenom X4 9600 Memory Required: 2 GB RAM Remended: 4 GB RAM Graphics Card Required: 2006 or later GeForce 8600 or Radeon HD 2600 Remended: GeForce 2xx Series or Radeon HD 6xxx series or greater. Sound Card Required: 100% DirectX 9 patible Audio Device Hard disk space Installation requires 10 GB of free hard disk space DVD-ROM Required: DVD-ROM drive Remend

The Lord of the Rings: War in the North is a co-op Action RPG, from the developers of Baldur’s Gate: Dark Alliance, that immerses you and your friends in a brutal new chapter in the War of the Ring. Set in Middle-earth during the time of the War of the Ring, but separate from its events, War in the North is inspired by both the Lord of the Rings books and movies allowing players to draw their swords, notch their axes, bend their bows and raise their staffs against a wide range of deadly enemies and traverse both established and never-before-seen locations. The result is a journey that is both epic and intimate, familiar yet unexpected.

Become One of the Unknown Heroes on Middle-earth

“With his far reaching rich hand Sauron might have done great evil in the North. Yet all that has been averted because a handful of heroes stood in his path.” – Gandalf the White 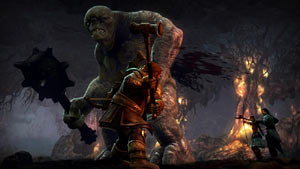 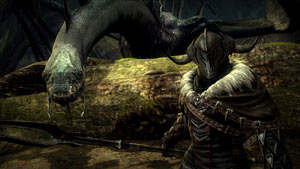 In The lord of the Rings: War in the North you are one of these heroes. Inspired by events from the famous book trilogy and their retelling in Peter Jackson’s films, the game features stunning visuals, brutally realistic combat, a unique and compelling new story, and innovative cooperative gameplay that pits you and your friends against the dark forces of Middle-earth. In this game you will form your own fellowship and fight against Sauron’s forces at the North.

The gameplay in The lord of the Rings: War in the North is all about cooperation. Players will take on the role of either Eradan, a Dúnedain ranger, Andriel, an Elf or Farin, a Dwarf. Each will have special abilities tied to their race – for example, a Dúnedain can combine different objects to create unique items for use or sale in-game; Elves possess superior sight, which will lead you to shortcuts and recognition of trouble ahead; and Dwarves have the ability to notice weaknesses at the walls and break them in order to find secret caves with different loots. Each race with have character class possibilities as well as legendary weapons. Once characters are established, they must band together in multiplayer action, working together to combat hordes enemies. These enemies include goblins pouring from their strongholds in the Misty Mountains, Uruk-hai from Isengard, savage wargs in the wilderness, giant spiders infesting Mirkwood, massive trolls and most dramatic and dangerous of all, bosses like Agandaûr, a deadly Black Númenórean lord who long ago was tempted and turned by the lies of Sauron.

Along your journey you will also cross paths with Lord of the Rings characters familiar and not so familiar, fulfilling little known but important events of the wider War of the Ring. These include: Aragorn’s scouting party of the North, while Frodo recovers in Rivendell from the wound he suffered at Weathertop; missions with the Elven sons of Elrond, Elladan and Elrohir; the responsibilities of the wizard, Radagast the Brown; encounters with the great eagles of the Misty Mountains and more.

A brutal new The Lord of the Ring adventure set during, but separate from the main events of the War of the Ring An exciting main story campaign coupled with dozens of side quests Cross paths with your favorite Lord of the Ring heroes, as well as more obscure characters Classic Action-RPG action that centers on co-op gameplay and character development Three playable races – Dúnedain (man), Elf, Dwarf, each with its own storyline and unique quests Multiple character classes including Mage, Scout and Warrior Magic abilities including active (fire, lightning and ice spells) as well passive (morale bonuses, protective shields/wards) spells The ability to craft items and potions A special Challenge Mode consisting of missions and maps built especially for co-op gameplay and not tied to the main campaign 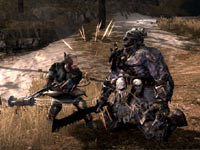 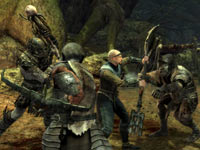 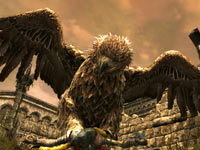 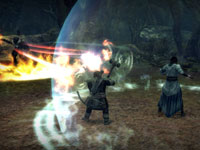