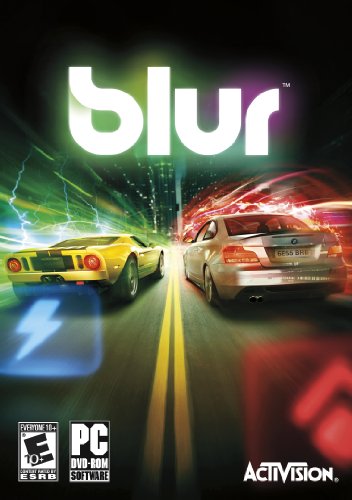 Blur is the ultimate racing experience, dropping you into heart-pumping, electrified in-the-pack action with 20 cars targeting the finish line and battling each other as they trade paint. Intense power-ups, including the ability to blast other cars out of the way with huge bursts of energy, as well as defensive shields, nitro speed boosts, and

Blur is the ultimate racing experience, dropping you into heart-pumping, electrified in-the-pack action with 20 cars targeting the finish line and battling each other as they trade paint. Intense power-ups, including the ability to blast other cars out of the way with huge bursts of energy, as well as defensive shields, nitro speed boosts, and landmines create realistic damage and destruction. Featuring 4-player split-screen action that offers you a new kind of racing experience, one that allows you to race with your friends and as part of a network of players in high intensity competition and fun. The new racing game from the award-winning team at Bizarre Creations delivers the most intense and fun racing experience ever. Beyond the action-packed tracks filled with fast curves, sneaky alternate routes, and hair-raising jumps, Blur’s story unfolds through a unique and innovative community-based interface, reaching far beyond the game itself. Build a community of allies, rivals and fans where you can share personalized racing experiences with friends both inside and outside the game. Blur is non-stop racing competition, intense and neck-and-neck action ensuring you’re always in the race and battling for position. Blur is the ultimate powered-up racing experience, dropping you into electrified action with a mass of cars targeting the finish line and battling each other as they trade paint in both single player and multiplayer action. Travel the globe from LA and San Francisco to Spain, the UK and more to take on the best the streets have to offer. Utilize an arsenal of powerups like nitro speed boosts, shock attacks, defensive shields, and landmines to beat your rivals across the finish line. You choose how and when to use your arsenal of powerups for ultimate impact in a race where the outcome is never certain. .caption { font-family: Verdana, Helvetica neue, Arial, serif; font-size: 10px; font-weight: bold; font-style: italic; } ul.indent { list-style: inside disc; text-indent: -15px; } table.callout { font-family: verdana; font-size: 11px; line-height: 1. 3em; } td.vgoverview { height: 125px; background: #9DC4D8 url(https://images-na.ssl-images-amazon.com/images/G/01/electronics/detail-page/callout-bg.png) repeat-x; border-left: 1px solid #999999; border-right: 1px solid #999999; padding-left: 20px; padding-right: 20px; padding-bottom: 10px; width: 250px; font-family: verdana; font-size: 12px; }

Tons of locations and 50+ licensed cars.
View larger. Story
In Blur the storyline plays out in the single player campaign. Here players assume the role of an up-and-coming racer who is looking to make a name for himself in the underground racing scene, but the competition is fierce. As you take on the series of races, you’ll meet a bunch of recurring characters. Some of these characters will be rivals, others perhaps will act as mentors, and some may be something else entirely. The only thing that is certain in the world of Blur is that in a race there are winners and losers, and racers will do anything to reach the finish line first. Gameplay
Although filled with the beautifully elaborate racing environments, realistic damage effects and a long list of available cars usually only found in simulation racers, Blur is an arcade racer through and through. Its single player campaign revolves around the game’s Career Mode, while in multiplayer there are additional options, including customizable cooperative and competitive races. In both of these though the second-to-second, fast-paced action is rooted in the wealth of powerups strewn throughout the track. These are addictive in their use and dramatic and devastating when used against opposing racers. With each successive race that players engage in they will use their collection of powerups to engage in vehicular combat of all sorts as they make their way to the finish. The game employs a fictional in-game social networking system allowing communication between drivers, and through this a way for players to establish alliances, find mentors and get familiar with the tactics of opponents. Monetary rewards are accumulated by drivers not only for success in competition, but by generous fans earned during races and for predetermined side challenges within races, proposed by those same fans. With the cash accumulated through all these, players can buy new cars and upgrade their ability to use powerups and keep their career going. Powerups
An impressive array of powerups are part and parcel to the vehicular combat that takes place Blur. These are spread across each of the game’s tracks and for the most part can be used at any time. Drivers start out with the ability to sock away up to two of these, but with success players can upgrade to add additional slots and even increase the potency of the powerups that they have. Powerups in the game include:
Shock – An electromagnetic pulse that homes in on the nearest car or packs of cars, surrounding you. Barge – An energy wave weapon designed to be unleashed at close range to hurl enemy drivers off course. Shunt – A forward firing projectile that can be used to bring you closer to competitors or blast them out of the way. Nitro – A short, powerful speed boost designed to get the driver back in contention when he/she falls behind. Mines – Explosive devices dropped out on to the track that blow apart any car that runs them over. Repair – A way to regain health without making a pit stop at a repair shop. Unlike other powerups, these are used instantly instead of being stored for later use. Multiplayer Support and Game Modes
Blur is designed from the ground up to provide an enthralling multiplayer experience both online and offline. Online players with enjoy support for up to 20 player races, while local offline play features 2-4 player, four-way split screen support through a single console and up to 20 player support via system link console configurations. Within races players will have the choice to play either competitively and cooperative, in a variety of play modes that offer a mix of customization and automation. Just a few of the race parameters that can be customized are locale, car class and number of racers. Players can also choose to let the game handle the specifics of race particulars with World Tour mode, which will string together race after race randomly, allowing friends to simply concentrate on the fun. Tracks and Cars
The gameworld of Blur contains an impressive array of tracks and cars. Players can expect to pile up the powerups and put the pedal to the metal across tracks set throughout 14 real cities and other locations throughout the world, each of these featuring recognizable streets and landmarks. Just a few of these include, London, San Francisco, Barcelona and Los Angeles. The game is also filled with over 50 fully licensed cars, unlockable and purchasable throughout the game. Key Game Features Powerups – Collect a variety of addictive dynamic powerups and use them independently or combo them strategically to take out your opponents. Real Racing – Dramatic collisions, realistic damage, stunning racing environments, real world locations and more than 50 licensed photo-realistic cars from the top manufacturers around the world. Social Network – Unique story-driving social network interface evolves as you compete in different races, make new friends, rivals and fans, and connect with other racers both in game and in real life. Multiplayer Support – Features online multiplayer supporting competitive and cooperative game play for up to 20 racers and 4 player split-screen multiplayer in local offline play. Multiple Reward System – Players can receive cash rewards to be used in-game in multiple ways including: winning races, gifts from in-game fans, and by completing fan determined side challenges.