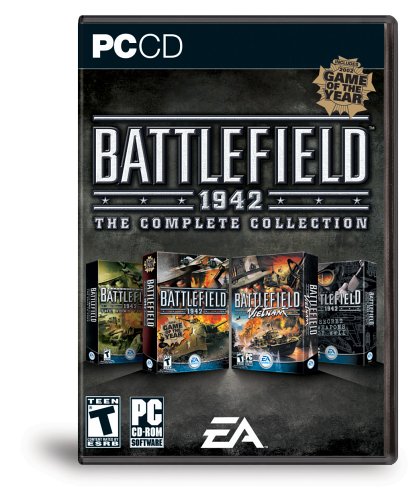 Real war action and strategy / Combat Enemies / Pick sides and see how you might have changed history / ESRB T = Teen Stats, rankings, and awards system drives collaborative play Battlefield 1942: The Complete Collection is the ultimate FPS experience. Included are all three Battlefield expansion packs in addition to the original: Battlefield

In Battlefield 1942, you’re a WWII soldier on a true-to-life battlefield, equipped with weapons that look and sound authentic, able to storm the beaches on foot or seamlessly jump into and out of any of 35 vehicles of war. The depth is incredible. While on foot, you play as one of five specialized classes (assault, medic, scout, antitank, or engineer) with varying equipment and abilities. The choice of vehicles ranges from a selection of tanks, jeeps, and other fairly standard mechanized land vehicles to exotic craft like battleships, submarines, and dive bombers. Best of all, you can pit yourself against your fellow man in objective-based online battles in four distinct WWII theaters of war: North Africa, South Asia Pacific, Western Europe, and Eastern Europe. This is everything that World War II Online should have been. This is Tribes 2 with better code, graphics, control–everything, and without the cheesy sci-fi trappings. This out-WWIIs Medal of Honor and Return to Castle Wolfenstein. This game is like the ultimate sandbox, with all the best toys.

Battlefield Vietnam: The Battlefield franchise enters a new era equipped with more firepower, modernized weaponry and vehicles, and a deeper infantry experience from the jungles to the beaches of Vietnam. From villages on the Ho Chi Minh Trail to the city streets of Hue wage modern warfare as the United States or North Vietnamese Army (NVA).

Secret Weapons over Normandy: Join a secret squad of pilots dedicated to thwarting the most heinous plans of the Third Reich. Fly over 20 authentic aircraft across 30 daring missions in this new WWII action-flyer. Lawrence Holland, the legendary creator of Star Wars X-Wing, Star Wars Tie Fighter, and Secret Weapons of the Luftwaffe returns with an exhilarating new game of action and intrigue. Can you be trusted with the most dangerous secrets of the war?

Battlefield 1942: The Road to Rome: Battlefield 1942: The Road to Rome is a multiplayer-focused expansion pack for more exciting WWI combat action. You’ll battle in the Italian and Sicilian campaigns of the war, on six new maps and real world missions like Operation Husky (Sicily) and the battles for Anzio and Monte Cassino. Use 8 new vehicles including the German BF-110 and British Mosquito fighter bombers to lead two new fighting forces – The French Legionnaires and Italian forces. You can even work with 3 new weapons – A rifle grenade launcher, the British Sten SMG and bayonets!