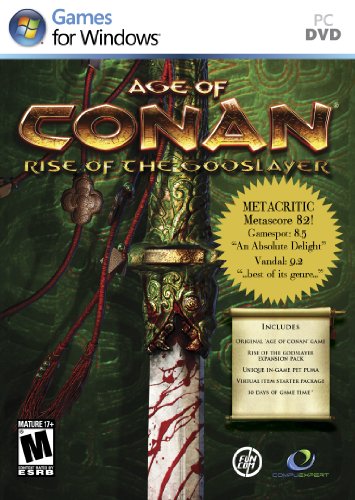 Age of Conan: Rise of the Godslayer – PC

As the sun sets on the Empire of the East, the Godslayer rises from the shadows. ‘Age of Conan: Rise of the Godslayer’ is the first expansion for the best-selling and critically acclaimed massively multiplayer online role-playing game ‘Age of Conan: Hyborian Adventures’. ‘Rise of the Godslayer’ will deliver a wealth of new content and features for players across several level ranges, all set in the fading eastern empire of Khitai – a mysterious and fabled setting within the world of Hyboria. Embark on the most savage, sexy and brutal Conan adventure yet as you descend into the shadows that have fallen over Khitai, the fabled empire of the east! Ride across the grassy steppes and see the purple pagodas of Paikang rising from the vine-choked bamboo jungles. Unravel the corruption that threatens to taint the very heart of this beautiful land forever! A wealth of new content for high-level players! Explore vast overland regions such as the serene Chosain Province or the desert of black sand known as Kara Korum, and delve into numerous new dungeons such as the magnificent Pillars of Heaven. Battle all-new monsters and acquire countless new rewards such as fantastic weapons and armor sets! Engage yourself in a mature and deep storyline that brings dramatic storytelling techniques into high-level gameplay. Through hundreds of new, lovingly crafted quests you will follow in the footsteps of Conan himself, where you will discover that the actions of the great barbarian have caused a great upheaval in this far flung land. The truth behind King Conan’s actions are twisted and hidden amongst the moral shades of grey of Kithan politics! Experience the true power of DirectX 10 graphics with enhanced visuals and new groundbreaking graphical features that brings the land of Khitai to life. The new visual style of the east will also provide a fresh, new look on Hyboria – the savage world of Conan!The first expansion for Funcom’s “M”-rated MMO, Age of Conan: Rise of the Godslayer offers players the chance to acquire a vast amount of new armor and weapons while exploring an entirely new region filled with diverse landscapes.

Experience combat never before seen in an MMO. View larger.

Travel through the plains of eastern Khitai. View larger.

Synopsis
In addition to travelling through the mountains, jungles, and plains of eastern Khitai, gamers can acquire new Tiger and Wolf mounts than can be trained, nurtured, and deployed in battle. A new faction system allows players to perform tasks and earn rewards from any of the warring groups in Khitai, and the new alternate advancement system lets gamers develop new powers and abilities, even when not logged into the server.

Features: Enter the true Conan experience – Experience the authenticity of Conan’s world as you journey through the same world lovingly described in Robert E. Howard’s original stories. Combat innovation – Experience combat never before seen in an MMO. Control every swing of your weapon and battle dynamically in real-time using sword, bow or even magic. Advance your character – Extend your character’s powers through a new alternate advancement system that allows you to unlock a vast collection of new abilities! Deep social game play – In ‘Age of Conan’ you are rarely alone. Group up with other players from around the world to explore the world, battle monsters and build entire cities. An audiovisual masterpiece – Experience Conan’s world through next-generation graphics never before seen in an MMO, and enjoy the depth of true 7.1 surround sound. Many hours of voice dialogues, the game is fully localized for French , German, Spanish, Polish, Russian, and English.